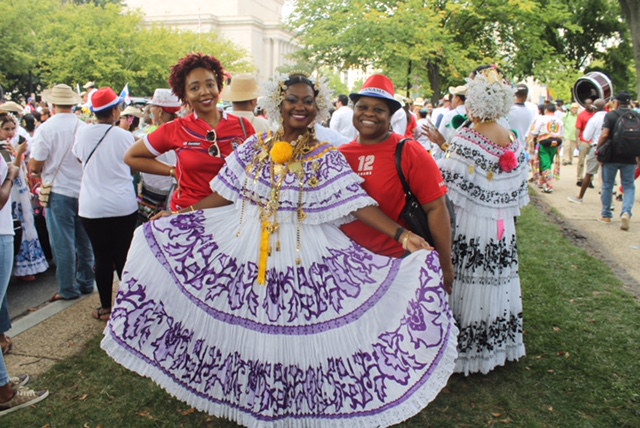 As many of you have seen, Amara La Negra, has sparked such a huge debate when it comes to Black Latinos, when she referred to herself as an Afro-Latino to a fellow Latino. We watched how that played out on television, but Amara is now getting the backlash. First and foremost, I’m a huge fan of this Dominican Beauty and of her unapologetic attitude and confidence. And secondly, she has the greatest natural fro, everrrrrr.

I watched this video a good 6 times and every time, I heard something else out of Young Hollywood, that did more than just make me say “hmm.” Let’s rant for a quick second.

As I’ve always stated, even in my Instagram bio, that I am Afro-Latina, and damn proud. My mother was brought here along with her sister, by my grandmother, in their early teens. They migrated to America from Panama, for a better life, education and more opportunities. But prior to my family migrating to America, we have to go back a few generations to explain our dark skin and blackness. A portion of my family tree, migrated to Panama from Barbados. The left Barbados to work on the Panama Canal, there were many jobs open and they knew that the job would be worth the move. Eventually, they remained in Panama after the canal was finished and decided to start families there. Barbados, Jamaica, Belize just to name a few mixes at the top of the tree. Eventually, with each generation being born in Panama, the new one knew more Spanish than the last, until my mother and aunt, who were both fluent in Spanish and “broken English”. My cousins and I, are first generation born Americans. Which means although we were born here, we are heavily influenced by the cultures of our family and proud.

So with that being said, I am Afro-Latina, and that is why.

“If you haven’t noticed, I am black.” – Amara La Negra

People always ask, “how can you be black and proud, if you’re Panamanian?” or  “how did you choose to be black?”; like we have the ability to morph. My race is black. You can look at my face, my skin, my natural kinky hair, and features to see that I am a black woman. By every definition of the word. The only difference is that under Ethnicity, I can’t identify as “African-American” or “Caucasian” due to being of Hispanic or Latin decent which normally appears as “not of Hispanic or Latin decent” in parenthesis next to both options. So, which box do I check? You guessed it, Hispanic or Latino.

So this, lady and gents is how this even possible.

“Are you African or is that just because you have an afro?” – Young Hollywood

The one thing I hate, and I say HATE, is that a lot of the discriminatory comments we Afro-Latinos get, is from our OWN people. They make comments like “y esa negra”, commenting on your skin tone, full lips, kinky hair, wide hips and facial features as If you were less than. And when you embrace your blackness, it is as if you were a monster with three heads that needs to be locked away in the basement. People that look like me aren’t in the telenovelas, movies or on their television stations. Latinas that look like me, aren’t celebrated or mentioned. Barely acknowledged by our own people. That’s why they are always fake shocked when they get dragged to the pits of the earth in Spanish by the negra they’ve been talking about, but didn’t know she could understand them.

Time and time again, we are told by elders that “tenemos que mejorar la raza.” in other words, don’t date black. We are told that we have to change our hair, to confirm and be more acceptable. Our elegance is stripped from us, due to our hair and our skin. But if we get offended, something is wrong with us, and not the ignorant person. When people talk about Latina women, they always show people like J. Lo, Penelope cruz or Sofia Vergara and less likely to show faces like Amara La Negra, Celia Cruz, Rosario Dawson, and Esperanza Spalding. But why? Why aren’t skin tones like mine idolized and shown to the masses? Why do we not get that same representation?

Stop acting as if we are the bottom of the barrel when it comes to what the ideal Latina is. We are come in different shades, and should not only be your maids in your telenovelas. We have depth, we’re brilliant, we’re beautiful, we are capable and most importantly, we are worth our weight in gold. So, why can’t you respect us?

One day there will be change, but we have to start today.

The beautiful thing about being black and proud and orgullosamente panameña, is that Panama has finally decided to celebrate la Etnia Negra, which are the African and Caribbean roots that many Afro-Latinos in the country have. They finally admit that some of our traditional foods, come from the Islands and Africa. It touches the country to have pride in their blackness and to be accepting. And it’s beautiful.

Say it one more time for the ones in the back.

I am proud of the color of my skin and how the different depths of Melanin is so diverse within my family. I love my natural kinky hair, my full lips, my wide hips and thick thighs. I love everything that makes me a black woman and the culture that made me Latina. I am proud to be a black woman. Soy orgullosamente panameña. y Soy Afro-Latina and damn proud. Respect us, we’ve been here.